A review of Sparkling Drop and Shimmering Drop 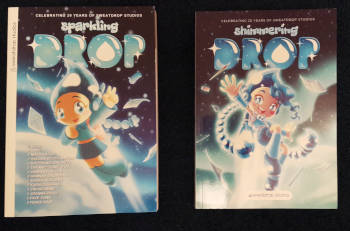 An image of Sparkling Drop and Shimmering Drop


Shimmering drop and Sparkling drop are the latest major anthologies from Sweatdrop studios in celebration of the groups’ 20th year of publishing. Indeed it has been almost that long that I’ve known them.

The group came to my attention back in 2004 after I started researching if people in the UK made manga and specifically manga style comics, and that’s how I found out about Sweatdrop. I joined their forum later that year, I of course having an interest in manga and having just got regular access to the internet I enjoyed the many discussions the group had on that old forum regarding art skills, manga, anime and more.

While the community was focused on the production of comics there was still plenty of scope for entertainment and talking shop and art rants. It may be that I have a bad case of rose tinted spectacles but I always remembered this community as a nice positive place where friendships were made to last, I personally spent a lot of time on those forums and that experience was a far cry from the decrepit social media that would replace it.

Regardless the community served it’s purpose, time went on talents developed and people moved on and many it would seem have continued onward with their creative endeavours.

I remember the first proper perfect bound anthology (a graphic novel) that Sweatdrop published, which was Sugardrops (also reviewed on ukmangaxl back in the day), and back in 2004/2005 this was a big thing for them as it was their transition from stapled fanzines to ‘proper’ graphic novels. It would be the first of many graphic novels eventually leading these two anthologies.

Sparkling drop focuses on Sweatdrop’s more distant past and little touches here and there such as the use of older branding and logo along with older designs of the groups’ mascot Sueto-Chan further elude to this. These are the early days back in the 2000’s with work from artists such as Keds and Hwei, Cin, Foxy, Niki Hunter, Vanessa Wells, and others. Some like Keds were just starting out as artists, while others such as Niki Hunter and Vanessa Wells were full time professionals in the game industry, Hayden Scott-Barron aka Dock was also a professional artist who had worked on titles such as Rollercoaster Tycoon.

Sweatdrop presented a number talented amateurs as well with some excellent works being Mango Milkshake by Stephanie Drewett, Absent by Hwei Lim and Hannah Saunders the creator of Nimbus base who was still at school when she penned it, indeed Sweatdrop Studios nourished the talent of a number of youngsters who’s work you’ll see in both anthologies. Some of the works published in Sparkling drop were originally single issue comics that haven’t been published in graphic novel format before and many haven’t been published in any format since those early days.

Shimmering drop focuses on the more recent past and uses up to date branding and mascot designs. The works showcased within are from the last 10 years or so, indeed there’s some works here I’ve not seen before though there are some familiar works such as Emma Vieceli’s Dragon Heir, though as some long term Sweatdrop readers might notice it’s not the original but a refreshed version drawn much later on known as Dragon Heir Reborn. 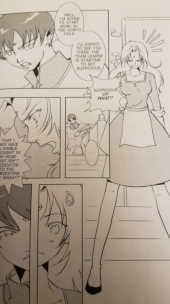 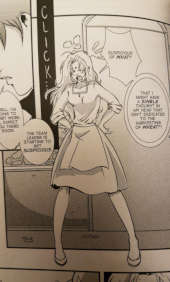 Many of the artists featured in Shimmering Drop have been around since the early years, though around half of the featured works are from more recent members such as Shazleen Kahn, Ruth Keattch and En Gingerboom. While All of the works within Shimmering Drop are of high quality here are a few that stand out particularly White Violet by Shazleen Kahn for it’s gritty art style and Defenders of the Sunset City by Morag Lewis being a solid overall package.

Additionally I enjoyed the MCM Expo etiquette section as drawn by various artists. Having been to MCM expo many times as an exhibitor myself I remember just how busy the Saturdays could get. Being organised was always a virtue, personal hygiene, keeping your hands to yourself and asking the cosplayers before photographing them should be self explanatory however somehow ‘free hugs’ is still a thing in the 2020’s?

I enjoyed the nostalgia value of Sparkling Drop, having owned most of the stories in their original zine format from all those years back. Back then most of us were either in our 20’s like me or teenagers we were busy carving out our own niche in life while enjoying comics made in Japan (and elsewhere) but mostly Japan.

Before we were limited to what we could find at Travelling Man and Waterstones, and people we knew who enjoyed our passion for these books we could count on one hand, however along came this thing called the internet and all of that changed, it was like the moment Palpatine zapped Mace Windu.

Inevitably came fan art and later some of us wanted to do our own original comics and the Sweatdrop Forums became the place where people who did that sort of thing or supported it congregated. Indeed this very website owes its existence in part to the existence of Sweatdrop Studios. I was inspired primarily to support my friends but I also enjoyed the technical challenges of running a website, it was a good fit for me.

If Sparkling Drop was the way we were then Shimmering Drop is what we became, and this can be seen in the overall increase in quality of the showcased works as Sweatdrop was realising it’s potential as publishing business. They say life is a marathon not a sprint, and this is true, how far Sweatdrop has come so far is likely not as far as the journey still ahead. 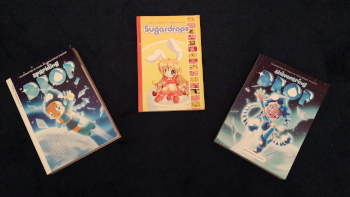 ALL IMAGES COURTESY OF SWEATDROP STUDIOS.