A cringy story about a cringy guy

Truth be told it’s many things, but in this instance it’s a Manga by the name of Rent-a-Girlfriend AKA, Kanojo Okarishimasu. So why is it cringe? 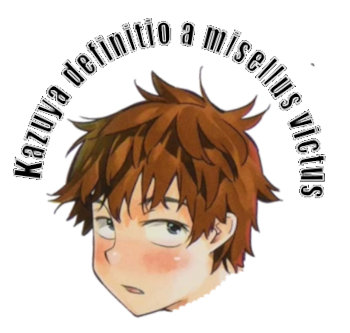 One word Kazuya, literally one of the worst male leads I’ve ever seen in a manga.

Whatever critique you could throw the way of Renal Girlfriend, similar manga like say Domestic Girlfriend does much better, the characters are just more likeable, realistic and relatable, where as the characters of Kanojo Okarishimasu just seem lack self awareness and even intelligence, they're almost one dimensional.

Best of all the male protagonist isn’t a massive looser, nor are the girls for that matter. The creator of Domestic girlfriend at least gives the reader a chance to be more than one dimensional, Rental Girlfiend on the other hand gives the reader no such quarter, just imagine Maison Ikkoku if Kyoko had been a rental girlfriend and the story was 20 volumes longer. Man that would suck.

It wouldn’t be the first time this mangaka touches on the controversial topics, that doesn’t make this manga bad by itself, the controversial topics are incidental. What makes this manga suck is the fact Kazuya is the most pathetic male protagonist I’ve ever seen in a manga. I’ve seen a few bad ones, where guys are either massive wimps or one dimensional alpha males, but Kazuya is just embarrassing to the point it make me not want to read and in fact I gave up reading it some time ago. I almost decided not to write a review at all given my belief is that the best way to cure the world of such bad things is to make sure the world remains ignorant of it’s existence.

Sweat and Soap was gross at the start but gets better and more snuggly, and while Nitori is a creep he at least has a SPINE, and people like that.

Kazuya doesn’t have that even.

The rental girlfriend thing isn’t that bad of a concept, indeed Japan is full of such strange concepts, like idols. Kazuya rents a girl to get over being dumped by his ex and because of bullshit circumstances that could easily be explained or got around he ends up renting this girl all the time because his family are convinced she’s his real girlfriend. It’s so implausible I couldn’t even view it in a satirical light, you string this whole rental girl thing out on the premise that you don’t want to let your grandma down?

Japanese and other Asian cultures have a tradition of this kind of thing going back far into the past so while it doesn’t surprise me that much, but this scenario is not only kind of unrealistic it’s also kind of wrong. Wrong because no rental girlfriend would put up with Kazuya's constant impositions and immature behaviour.

This story, this scenario makes no sense as it’s a lie not even worth rolling with as there is no benefit, indeed it makes your character look like an absolute cad.

What can I say, a new low has been achieved.

The whole point of the rental girlfriend is to give some socially awkward guys, or a shut-in the chance to interact with a normal woman for a change, but Kazuya isn’t anything like that, he’s a liar, he misleads, he begs people to go along with his scams, and he just strings people along like the con man he is.

He’s a normal guy who had a girlfriend and lost her (go figure) but who has at least one girl chasing after him throughout the story (why?). He doesn’t actually have to do the rental girlfriend thing. For some reason despite being creepy, and cowardly, over reacting to every little thing and having virtually no social skills he still manages to attract women, but refuses them all to be with the rental girl instead (why?).

This manga is a massive excuse to draw lots of pretty girls though and that’s one thing that this manga excels at. It’s full of very good fashion illustrations and such; eye candy. The creator is trying to sell the main female character to readers like they’d sell an idol, but given past histories this doesn't surprise me.

There’s more than the fair share of such manga these days. Notably AKB49 Ren'ai Kinshi Jourei, by the same mangaka no less. This manga was much better. The male lead isn’t actually a looser even though he’s basically a liar in that comic, so the mangaka can make likeable and complex male characters when he wants to, even though he misleads everyone in his life at least he does so with conviction, though for honourable reasons and does at least act with some dignity unlike Kazuya.

The one part of the story I did think worth reading was the crowd funding arc, where he and she and hangers on, crowd fund an indie film together now I quite liked this part, in this arc Kazuya actually behaves like an adult and shows some excellent character growth, but immediately after the crowd funding plot we’re back to the same thing again with him acting like some pathetic child in virtually every chapter.

It’s terrible, every time we get to the romance the creator puts god knows how many unfathomably stupid, improbable and illogical roadblocks in the way, mostly Kazuya acting like some cringing chicken and Chizuru acting completely cold and oblivious all the time. The pacing is off it’s not a smooth read in the slightest, but it somehow ends up becoming predictable, you just know that the next chapter is probably just filler.

In all the manga I’ve ever read, I think we were all happy for Hideki in Chobits, or Godai from Maison Ikkoku, but when it comes To Rent-a-Girlfriend, I don’t ever think I’ve ever rooted for the Girl to just straight up dump this guy on his ass and make him crawl back to love interest number 2 who them rightfully spurns him as well leaving him alone as he rightly deserves to be. We spend multiple chapters just on Kazuya pratting about.

This has got to be one of my more scathing reviews but I am sick to death after 20 odd years of reading manga that’s being going on 20 volumes too long, where it becomes more about mangaka’s willingness to milk the reader than about the story itself. A shorter story would have been less annoying but Kazuya is what he is. But you could have wrote 5 stories in the space of this one and they’d have been better. It’s not like you’d have lost any cheddar over it.

If your story is more than 15 volumes (150 chapters) long and 10 volumes of it is just filler you’re probably taking the piss. There are times when filler can be useful especially if not over done, Kaoru Mori uses these as interludes where she might inject a cultural or historical lesson into her story and always accompanied by magnificent artwork.

Rent-a-Girlfriend isn’t the first manga to annoy me by it’s unnecessary length and bad story telling. There are hundreds of manga like this, and yeah I get it the creator has to make a buck, and there's a studio to run and assitants to pay, etc etc. You’ll notice my site isn’t filled with reviews of such manga because generally I can’t be bothered tearing some persons work apart, I try to keep things positive because I like comics as a medium and I want people to make them, but for once I thought I’d make an exception because I want to see an end to comics like this, where the creator is just string things out to make more money.

You know I’m usually quite against invasive data analytics, but I think they’d benefit Kodansha because it might help them to direct their mangaka to make better stories.

No likey no readie?

Sounds good to me.