A review of Bibliomania


Bibliomania, biblio (book) and mania (an excessive enthusiasm for) I think it sums it up pretty well.

Bibliomania is quite a short manga being only like 12 chapters barely enough to make a volume but it’s really quite something to behold, thought provoking, terrifying, loaded with metaphors, and euphemisms, a look at the human condition; not always the best parts either. The manga, Bibliomania is many things but one thing’s for sure it’ll likely leave it’s mark on you.

Everything about this manga isn’t quite right, it’s set in the world but not quite as we know it, it’s recognisable, but like Nagilums void and his fake Yamato the walls just aren’t quite tritanium if you catch my drift. The imagery at times is really quite unsettling. Funnily enough I could make another TNG analogy in that initially the vibe I was getting was that of the Hotel Royal episode, perhaps even the Red Dwarf episode better than life, it could also be said that Serpent resembles Aku off Samurai Jack.

On a dark desert highway, cool wind in my hair...

The majority of the story is set inside the Serpents Manor, this being an evil magical book that steals souls for some an as yet unknown purpose, the book aka the manor is inhabited by it’s various guests (captured souls) and the whole place is run by a creature most originally called ‘Serpent’, yep that’s his name, He’s odd looking for a snake with big square teeth and odd looking eyes and a suit and crucially arms, though the rest of him is pretty serpentine.

The book would seem to grant it’s “guests” their every whim at least on the surface, but our protagonist Alice is having none of it, she just wants to leave not being interested in fake world that Serpent and his manor can offer, to do so she must go back through all the other rooms to get to room 000 or page 000 so Serpent tells her, this being a book and all.

You can check-out any time you like, but you can never leave!

The problem is if you leave your room your body rots, a little at first but the further back you go the worse it gets until you die and you turn into words or a I made the analogy, your data gets corrupted and you turn into ascii.

While it’s true the book grants wishes (in order to keep people in their rooms) but as you’ll discover as your read through one room after another the guests become in increasingly deluded, warped and insane the only exception to this being a scientist the book trapped but he’s eccentric in his own ways, having a Yorkshire accent for one.

Being horror there’s plenty of nightmare fuel to be had, the imagery can change for the worst without much warning, as I say there’s plenty more within so it pays to turn carefully. Horror buffs will love that kind of thing, but I’m not a massive fan of horror. That being said you can miss out on some cracking stories if you avoid horror, but as I said turn carefully.

The story does go into a little bit of character development around the various souls trapped in the book, they why’s and what for’s and so on. There are flashbacks during the start of each chapter going into how we got here and these are worth holding in memory until the end as it all makes sense, then. The story tends to progress linearly but will insert past events at the start of each chapter usually.

All is not as it seems in this manga however...

I got the the impression of the book that steals peoples souls being like social media companies with algorithms catering to their ‘guests’ whims and woes to keep them engaged on their platforms, much like Serpents book, transcribing human thoughts and emotions to words. You could analyse this story forever and come up with many analogies like this. Indeed given the characters in the book there’s obvious reference to Alice in Wonderland.

Previously I had a whole analysys secton to this review which I removed, I since made a seperate article relating to that. You'd be advised to read Bibliomania first as any deep dive will inevitably contain spoilers.

The story was intriguing, at times even gripping with some fantasticality detailed artwork to boot. I think the whole tone of the manga, the imagery the style just worked really well. The machines of the civilization had all kinds of animalistic motifs built in, the ships, aircraft etc at times magnificent. The horror imagery wasn’t particularly gory, but expect warped depictions of humans and other monstrous imagery.

The end was OK, although Alice’s backstory had some loose ends. The ending was a definitive end but it wasn’t a massively satisfying ending, indeed some might call it depressing, the bad guy wins and not even a way that’s good for the bad guy its a bit of a loose loose situation, but I believe it was designed that way to act as a kind of warning.

Even if you don’t like the ending it’s the middle the counts the most in this story, this is where the mystery opens up and the thought provoking stuff happens.

Bibliomania is certainly one of the most thought provoking manga I’ve read in a while certainly worth your time to read if you can find it. 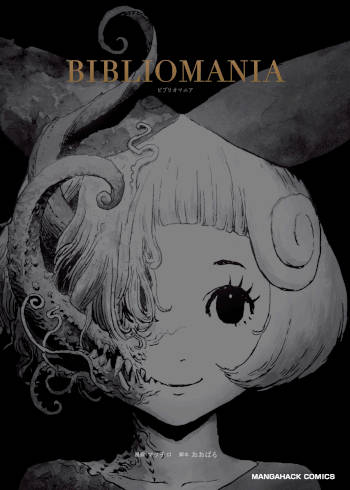 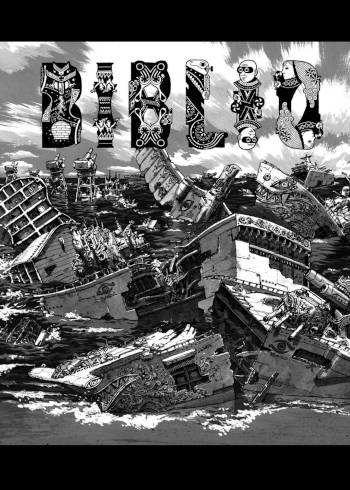